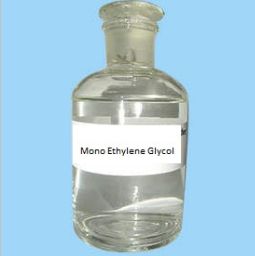 Mono Ethylene Glycol (C2H6O2) is a colorless, odorless, viscous dihydroxy alcohol. It has a sweet taste, but is poisonous if ingested. Ethylene glycol is the most important glycol commercially available and is manufactured on a large scale in the United States. It is used as an antifreeze and coolant, in hydraulic fluids, and in the manufacture of low-freezing dynamites and resins.

Uses :
Ethylene glycol has many uses, including as antifreeze in cooling and heating systems, in hydraulic brake fluids, and as a solvent. Acute (short-term) exposure of humans to ethylene glycol by ingesting large quantities causes three stages of health effects: central nervous system (CNS) depression, followed by cardiopulmonary effects, and later renal damage. The only effects noted in one study of individuals exposed to low levels of ethylene glycol by inhalation for about a month were throat and upper respiratory tract irritation.